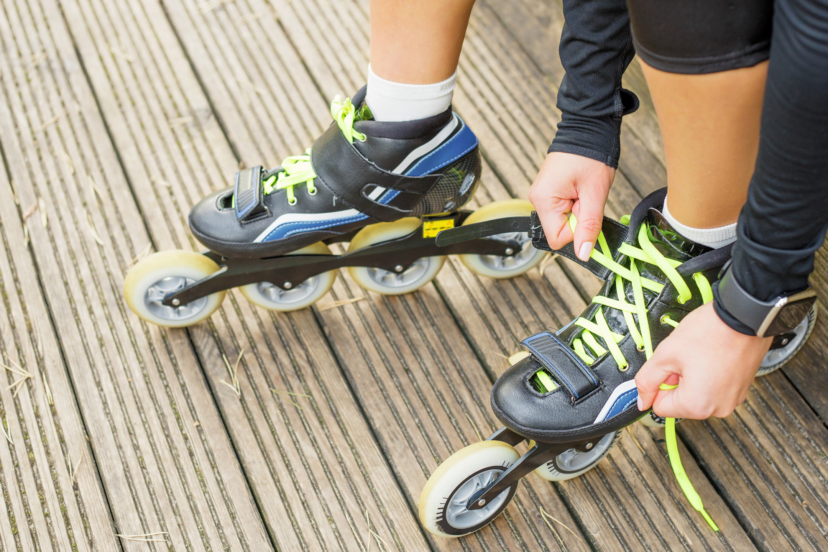 Rollerblading is an activity that is popular all around the world. In spite of its popularity, however, not many know the history behind this much-loved hobby. It’s actually been around in some form or other for a couple of hundred years. If it surprises you to know that your great, great, great, great grandfather may have been rolling around on inline skates, read on to learn a little more about the inventor of rollerblades.

The year was 1760 (or somewhere around there– some accounts place it closer to 1743 or 1735), and the place was Belgium. Somewhat of a jack-of-all-trades, John Joseph Merlin was an inventor and instrument maker who also owned a museum.

Merlin attached small metal wheels to the bottom of a shoe and turned them into the first known prototype of an inline skate. What Merlin failed to do, however, was include a stopping mechanism. His inaugural skate was said to have come to an abrupt halt when he crashed into– and subsequently shattered– a very expensive mirror. While Merlin’s skates lacked the ability to effectively stop, they did set the stage for modern inline skates and, eventually, rollerblades.

Rollerskate designs continued to evolve throughout the 1800s. Around the year 1819, Monsieur Petibled, an inventor from France, was issued what is thought to be the first rollerskating-related patent for his three-wheeled skates. 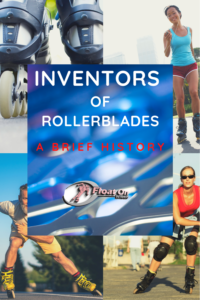 A few decades later, in 1863, James Plimpton altered the design a bit, coming up with the standard four-wheeled design that many inline skates still feature today. He helped popularize the sport further by creating the New York Roller Skating Association and opening up what was likely the very first roller rink.

In the 1870s, the first skates with a toe-stop brake were created, although this design took many years to catch on. A few years later, in the 1880s, manufacturers began using steel ball bearings in their skate designs. This increased their durability and also made the skates much easier to operate.

Roller skates continued to rise in popularity, especially into the 1900s. It took a great deal of evolution, however, for rollerblades to emerge from their inline cousins.

Fast forward one hundred or so years later, to 1980, when brothers Scott and Brennan Olsen were looking for a way to train for hockey during the summer months. They were browsing through a local sporting goods store in their native Minnesota when they come across an old pair of inline skates. They noted that the positioning of the wheels was similar to that of an ice skate, and wondered if it might be just what they were searching for.

The Olsen brothers began tinkering with the design, eventually tweaking it and making it their own. They began producing their newly created skates under the moniker Rollerblade. These early Rollerblade skates were built right in their parents’ basement, and Scott Olsen officially trademarked the term Rollerblade in 1983.

Their initial design did have some flaws that had to be worked out in order for the product to gain widespread popularity, however. The Olsen brother’s skates were a bit cumbersome and difficult to adjust. They used a toe-brake, but it was not able to bring the rollerblades to a complete stop as quickly as one might hope. And the wheels themselves were fragile and prone to breaking. Still, this early design paved the way for the rollerblades we know and love today.

Over the next few years, the company was sold to another party with more funding. The newly purchased Rollerblade, Inc began perfecting the Olsen brothers’ design even further, adding fiberglass frames and better brakes and making the skates easier to adjust.

The company had its first real mainstream success with the Lightning TRS, followed by the Macro and Aeroblade. The latter two models were the first inline skates to use the now-popular three buckle fastening system.

By the late 1980s, other companies had begun to pop up producing similarly designed skates. The name rollerblade began to become synonymous with any inline skate, something that may have been problematic for Rollerblade’s brand recognition, but ultimately led to the popularity of the term today.

Rollerblade, Inc, again at the forefront of inline skate design, also made advancements to their skate design in the early 1990s. They were able to significantly reduce the weight and bulkiness of their skates by beginning to use a glass-reinforced thermoplastic resin in the frame. And in 1993, the company created Active Brake Technology, also known as ABT. With ABT, a rubber stopper is affixed to the bottom of the skate using a fiberglass post. This advancement led to safer stopping for skaters.

Rollerblades in their current form may have only been around for the past forty years, but inline skates have been around for centuries. The advancements in recent years have helped make the sport what it is today. Thank you for reading our article on the inventor of rollerblades!

Welcome! I'm Matthew, the author of Float On Wheels. What started out as an intention to train my son on how to rollerblading has turned into a mission to share my knowledge and experience with as many people as possible. Inline skating can be fun, you can do so in solo or in a large group. Thank you for stopping by!

Carrying skates around can be inconvenient and awkward. If you own a pair of inline skates,…

Rollerblading can be more than just a fun hobby. It can also help open the door…

The 5 Best Rollerblade Knee Pads For Your Protection

Are you organizing protective gear for your next rollerblading? Rollerblading is lots of fun. However, you…

How do you get started rollerblading or inline skating? Welcome! You've come to the right place. I'm Matthew Donovan, the author of Float On Wheels. What started out as an intention to train my son on how to rollerblading has turned into a mission to share my knowledge and experience with as many people as possible. When you are thinking about rollerblading for beginners, there are a few gears that you need to get before you begin. Please read my blog posts for more info. Thank you for stopping by!